Challenges in bilingual families no one tells you about 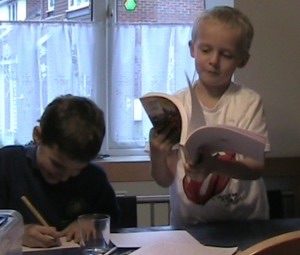 I am a mother to a ten-year-old bilingual and a university lecturer and therefore interested in bilingualism professionally and privately. When my husband and I decided to bring up our child bilingually we delved into a range of guidebooks to make sure we were not going to make mistakes. But when I investigated language learning in bilingual families in greater detail I came across issues and challenges that bilingual families encounter that are not mentioned in any of those handbooks or parent guides.

1. Language differences may result in Mathematical problems
Books highlight that learning two languages may mean that one language interferes with the other and that bilingual children may make mistakes that monolinguals will not think of. However, nobody prepares you for the fact that suddenly mathematical problems occur. In German the language for numbers is organised differently to the language in English. So while 52 will be “fifty-two” in English, it is “two and fifty” in German; this means young children may struggle with place values early on in schools. Similarly, reading the clock poses a range of issues as “half twelve” in English is 12.30 but in German is 11.30. This confusion is not due to a lack of Mathematical understanding but a mis-representation of linguistic knowledge.

2. Language suddenly becomes too imprecise
Guidebooks and research suggest that with the “one parent – one language” approach children will learn to distinguish the two systems and are less likely to mix the languages. However, in practice bilingual children switch between languages, just because they can. Words contain nuances and connotations that cannot always be translated into the respective other language, so whilst your child may know all the words he/she may deliberately decide to use the “wrong” language. Our ten-year-old will never use the German word for “a waste of time”, as it is not strong enough in its connotation. To him, “dawdle” does not really express the waste of his time and therefore he consciously switches to express more precisely what he feels.

3. Language learning amongst younger siblings
Research and handbooks suggest that younger siblings will be better in the minority language than their first-born counterparts because they are exposed to and listen in to more conversations. This sounds logical, but this is not necessarily a truthful picture. Friends whose family set-up is different to ours, they have two children, discovered that the younger siblings are not as confident and conscientious as their older siblings. One family took the approach to use “French at home and English outside the home or with visitors”. By the time the younger boy was learning to speak, the older sibling had many friends visiting him for playtimes, during which they reverted to English. Also, the family went on many outings in the formative years, whilst with the first-born son Mum tended to be at home a lot more. As a result, the younger boy actually had less conversation time in French than the first-born ever had.
In another family, a French Mum of two observed a huge difference in her children’s personality. Whilst her older child, a girl, is very conscious of her language abilities and in her drive to be perfect does not like making mistakes, her younger child, a boy, is a lot more relaxed and carefree in his handling of language. This difference in attitude is inherent in the children and can be observed in all aspects of their learning in school, too.

4. Your child is bilingual but not bicultural
From my experiences as well as those of the other families involved in the investigation, it became obvious that we all had the expectations of raising mini-versions of our own selves. However, raising a child in two languages does not mean that they understand the culture of the two languages. Their experiences and the development of their identities are different to their parents’, which is disappointing and at times even feels hurtful, almost a rejection of the parents’ own identities. One parent brought her experiences to the point when she was talking about the half-term holiday week, during which her son picked up a French book to do some reading ” You know, it wasn’t just that he was reading in French, which was great, it was also that he was actually reading the Smurfs. Something I grew up with and so French. I was like ahhhhh he’s French after all.”

Knowing what we know now, would any family of those mentioned in here have taken a different approach? Probably not, as we can all see the benefits and advantages for our children. However, we might have had fewer disappointments along the way.

Thank you to Lidia and David for inspiring me to write this article, which can be viewed on their website, too.