Identity boxes: An art-based approach at a distance 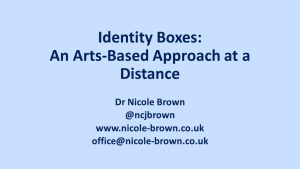 This presentation video exploring identity boxes as an art-based approach at a distance was recorded for the virtual NVivo conference Qualitative Research in a Changing World.

In my contribution I provide insight into the use of identity boxes as a data collection method to elicit experiences at distance. The project was created to ensure that participants would not be subjected to lengthy travels as they experienced fluctuating health issues. Participants were given a question and were asked to respond to the question using objects to represent their answers. They then took a photo of their box and shared that via email with a very brief statement of what they were trying to say. Once I had received the response to one question, I released the next question. The basis for the identity box approach is that a) human understanding is embodied (Finlay, 2008, 2015), that b) language is insufficient to explain or describe certain experiences such as pain (e.g. Sontag, 2003; Scarry, 1985), and that c) human understanding and communication are metaphorical (Lakoff and Johnson, 2003). In my reflection I show that the approach posed potential risks around the emotional vulnerability of participants, with some participants experiencing the project as cathartic and therapeutic, whilst others struggled with the process of thinking through objects. Although using a less conventional approach to research led to deeper, richer reflections and thus relevant, interesting data, concerns were raised around relevance, generalisability, and more generally the evaluation of the research. The paper concludes with a reconsideration of the identity boxes as a method of data collection at distance.

The slides and resources I used for this interactive presentation can be downloaded in PDF from here.